Lorcan Finnegan, an irish director is making quite a name for himself with such new and singular horrors as Without Name and his debut short Foxes.

“A young couple looking for the perfect home find themselves trapped in a mysterious labyrinth-like neighborhood of identical houses.”

Reviewers have been seeing the horror of domesticity, suburbia etc I will go another route allude to by friend Ion Dumitrescu “the home-grown alien”. I will also try to go into a more biological, even address the Neo-Darwinist frame. As such again, I am not trying to interpret, to tease out the various layers or let alone do a synopsis, analysis, but explore ideas, tendencies and directions where the Vivarium movie points at without any explicit references.

4. Capital as a real estate agent with a human face, as the ultimate alien parasite is using human caretakers so it can replicate itself, but only if it can maintain its integrity and mission to sell even more of its own. Only if it can learn to pretend it is human, to be able to find its next host, and only if it can maintain low mutation rates and keep redistributing the same encapsulated, self-contained creepy clean dream worlds, the same maze of pristine hoods and home ownership plans.

5. Enclosure of the commons has been a clear trademark of modernity, jump-starting the Industrial Revolution. The important thing is that it does not matter that the inhuman other breaks trough, that it is always showing & covering reality up the horizon. At the same time this normie uniformity has to be understood at another level that thethe suburbia model of the Fordist production line does not cover. Now the real uniformity does not lie anymore in the standardized units but in the standard of being sold and serialized difference, more of the same kind of newness, of showing one can avoid this 50s model that has been in a steady disrepute since both insider reactionaagainst company men & 60s counterculture has weirded it out and infused the mainstream with a steady stream of ready made otherness and non- similarity which in itself is neither good nor bad in itself but has come to signify stasis.

6. Same time, children have taken center stage in capitalism, the commodification of childhood has made them the principal port where the new desires, fears and commercial pressures jack in. Once you get to the children, the road is free to their parents pocket. Again not trying to pasre over, over interpret or look into what’s not there only trying to see why the movie is revealing in our current predicament.

7. What an incredible contrast between thus Vivarium (Mortuarium?), its closed systems (all food is introduced miraculously via outside delivery fro an unknown elsewhere – a pun on food home delivery/increasing Amazonification) and the self sufficiency of eco-technological Biospherics. One has to consider this contrast of two encapsulated models of living with pink self identic clouds(cloud computing?) – one that recreates (and reproduces) the desertification of the real (to take a Baudrillard phrase) a timeless unsustainable lifestyle, the earthly 50s golden age, by the way one that has been preserved even in the Scientological paradise myth & the search for a new possible life that takes into account all tbe synergistic & newly formed & evolving relationships within closed systems potentially on other planets and settlements elsewhere. One interesting absence are computers, desktops, thr internet per se even mobile phones are somehow absent, muted and only pre internet TV ëerieness is the favored medium. 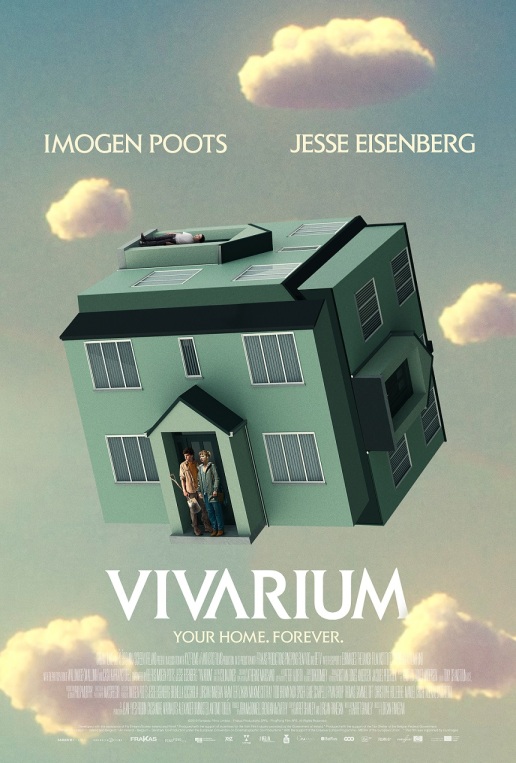 An incredible comedy movie that is available online, even if in a trashy VHS rip version – the medium perfectly fits the content. With some great actors such as late great Harry Dean Stanton, a phenomenal Cindy Williams and and incredibly likable macho-drifter Fred Ward.

Don’t know about you but I find this trashy cult movie a revelation in many senses. First it depicts the whole playa of fringe culture, high weirdness and faith hybridization, after the whole 1970s drift of the counterculture waking up in the midst of Reagan era (movie was finished in 1981 but released in 1985). Take it as a goofy, zany heart felt retro comedy, and it is still ok. It also combines the most unlikely bed fellows in an alternate reality US, almost as if the local mid west hicks would finally join the Rajneesh commune. The line is so blurry thats we can see all the shifts, radical possibilities & liabilities of charisma. Or it makes one consider an even more radical possibility, that an agnostic even cynical car smuggling atheist might lend himself to a mad and bumpy vision quest. By the 70s various subcultures, be it activist or hippie Fists or Heads had been intermingling or fusing as thr the term ‘freak’ started being used both by anti-drug Jesus Freaks or by hybrid experimenting /performative eco-technical living such as the Synergia commune and its later outpost Biosphere 2 (also in asemi desert setting).

What I like most is how the whole phenomenology of faith healers, quacks, abductee, miracle peddlers of the worst kind is being tackled. In a comic, parodic, screwball comedy, utterly unsophisticated way it gives credence to the whole Ufological transcendent drive. Ufo cults are easy to dismiss or to ridicule, but this movie takes it into another plane. It shows what is the genuine core behind it, its modern importance and the way it has incorporated so many other, older and more orthodox apparently outlooks (Jesus is an Alien) abducting them into outer space. They are basically a living phenomenon mapping out a new territory of contact and extra planetary revelation out of a very terrestrial setting. It has abducted & taken common feelings into a different dimension, while becoming such a waste basket hodge podge of bizarre witnessings from the most unexpected quarters, age groups and backgrounds. It also almost shows the glimpses of a rich quantum foam and sleeze that gave birth to the Burning Man and all the other desert happenings. To be sure the 2012 Mayan calendar was on, Terence and Dennis McKenna already launched their eschatological visions into the 80s America.

It is also a great example of James Williams approach on faith, and his experiential, interior lived contact, his still valuable take on extreme religious vision quests and nearly psychotic episodes. While non-dissmissive, it is one of the most irreverent movies in regard to all sorts of beliefs, even the most sincere one while it keeps an open mind, it never shows any preferences and always regards traditions as multiform and shape-shifting, often hype oriented and capital driven in the form of revivals and charismatic churches that pick on the newest trend or the most outrageous message. It also shows how much one is not in control, but under the spell or open to an outside that is mediated by the most unlikely messengers, hitchhiking the most bland or unspectacular of carriers & transmitters, even if that outside is constantly being subsumed into capitalism, circuits of profit and consumption, always fragile & liable to became the next attraction and the next way to bring a quick buck on the back of gullible congregations that are always never quite so lost or gullible. It shows what it might mean to be stranded in the universe’s backyard, washed out on the cosmic shore.

“A computer engineer investigates the secretive development division in her company, which she believes is behind the disappearance of her boyfriend.”

Alex Garland that left quite an indelible mark with his Annihilation and Ex Machina is now back with a Hulu (FX on Hulu) series largely about quantum computing, the fabric of reality, alternate history, Silicon Valley, affects and technology. It is also true that this base realty of the Silicon Valley has somehow (at least BC/ Before Corona) come to crowd out every other reality. I want to briefly highlight what struck me most about the series, it is a very mysterious, vague, eerie episodes that play with non linearity and temporal paradoxes, so a plot-line synopsis will completely miss the mark. I am also thankful that it avoids all the boring old determinsm-non determinism discussions and all the free will dead alleys. What is more important is what is left unsaid, or where one can extend and speculate with and around this series. It looks and feels in a certain way, which is definitely a lack in most your run-of-the-mill Sci-fi’s. The closest I can think of is the wonderful noir Cold War Sci-fi 1973 World on a Wire by Rainer Werner Fassbinder. In my mind it almost picks up where the other one left.

Devs could be all matter of things, I had good friends who recommended the series (big thx to that) speculating about the title of it even, so I am not gonna continue that venue here. Also no major spoilers I hope.

2. Same time there is some incredible almost melodic, tonal interplay of sentiments, they are not just attachments for the audience to approach such a difficult subject, in fact one can feel how these affects that seem almost autonomous, a shadowplay of research into abstruse knowledge. Affects intervene, subtend & promote actions, also interfere, flash forward, move around and lead the whole highly abstract endeavor. What I like is its lack of theoretization, its sub theorizing. Of one needs further metaphysical trajectories one cam search it elsewhere. Devs is almost a key illustration of Rani Lill Anjum and Stephen Mumford have (in more philosophical terms) boldly posited in their path breaking 2018 book – a third modality (“dispositional modality” DM) or tendency, beside the other two – necessity and possibility.

Weird naturalism (to pick on another term employed by E Davis) or weird aesthetics (to use Steven Shaviro’s phrase) is full of such vague incentives, a lure that leads nowhere or to something else, where the affective drive breaks loose, ways in which theyaare effective not only as anchor points of personal history or quest but as oscillating, flipping over constantly into impossible reaches and improbable planes, madness and make believe, false leads and unfinished plans. The most normal, the most homely feels made up in a way that the candy and endearing 1990s schematic VR, especially in movies and musivc videos never made the real feel. It maybe started then, but now every vintage furniture or lighting feels artificial, highly composed and rendered (not surreal in the old sense) but nevertheless compelling and etherReal.