timespace coordinates: It’s 1985 in Hawkins, Indiana, and summer’s heating up. School’s out, there’s a brand new mall in town, and the Hawkins crew are on the cusp of adulthood.. (premise)

The third season of the American science fiction-horror web television series Stranger Things, titled onscreen as Stranger Things 3, premiered on Netflix‘s web streaming service starting on July 4, 2019. The series was created by the Duffer Brothers, who are also executive producers along with Shawn Levy, Dan Cohen and Iain Paterson 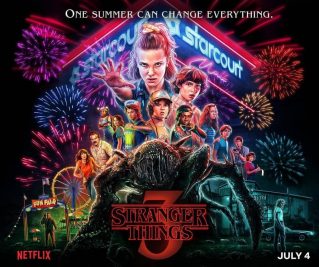