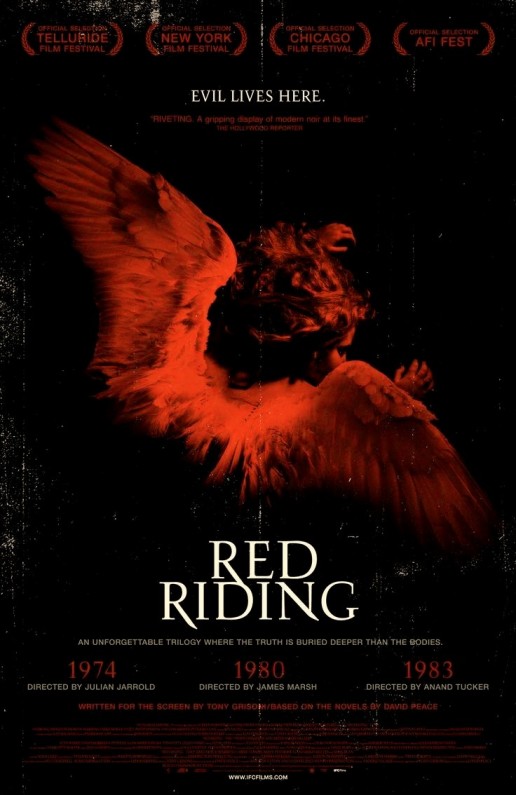 Red Riding (2009) is a three-part television adaptation of English author David Peace‘s Red Riding Quartet (1999–2002). The quartet comprises the novels Nineteen Seventy-Four (1999), Nineteen Seventy-Seven (2000), Nineteen Eighty (2001) and Nineteen Eighty-Three (2002) and the first, third, and fourth of these books became three feature-length television episodes: Red Riding 1974, Red Riding 1980, and Red Riding 1983. They aired in the UK on Channel 4 beginning on 5 March 2009 and were produced by Revolution Films. The three films were released theatrically in the US in February 2010.

Set against a backdrop of serial murders from 1974 to 1983, including the Yorkshire Ripper killings, the books and films follow several recurring fictional characters through a bleak and violent world of multi-layered police corruption and organised crime. Although there are allusions to real-life crimes, the plot is fictional rather than a documentary or factual account of events. Both the books and films mix elements of fact, fiction, and conspiracy theory – a confection dubbed “Yorkshire Noir” by some critics – and are notable for a chronologically fractured narrative and for defying neat or trite endings and resolutions. The name of the series is a reference to the murders and to their location, the historic county of Yorkshire being traditionally divided into three areas known as ridings.